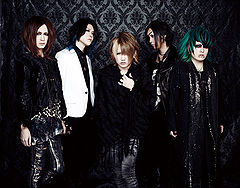 "Mimic" is the 19th major and 21st single overall released by NIGHTMARE. It was released in three versions. Type A came with DVD that included the PV for "mimic", Type B came with a PV for "PARANOID" and Type C came with an extra song entitled "Honesty". The single reached #9 on the Oricon weekly charts, where it has charted for four weeks.