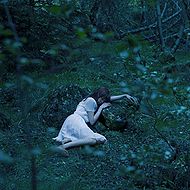 "Nemuri no Mori" is the second digital single released by Aimer. It was later remixed and re-recorded as a duet with Ozaki Yuuki, frontman of the band Galileo Galilei, under the title "Nemuri no Mori (Kazuki Remix)". It first appeared on Aimer's second mini-album Dareka, Umi wo. EP.