"NoNoNo" is a song recorded by A Pink. It was released in their third mini-album Secret Garden as track #2 and choosed as title track of it.

A year and three months later, the song was re-recorded in Japanese and released as their Japanese debut single. It was released in nine versions: eight limited editions (two CD+DVD versions and six limited CD only editions, including a solo jacket cover and a trading card of the correspondent member) and a regular edition. Limited edition type A includes an "Apink SPECIAL GOODS (Special Mirror)" with the single. The b-side, "MY MY", is a Japanese version of the original Korean song, released on their second Korean mini-album Snow Pink. 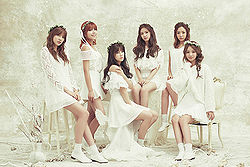 A Pink promoting the single