"SUNDAY MONDAY" is a song recorded by APink. It was released on their fourth mini-album Pink Blossom as track #1. The following year the song was re-recorded in Japanese and released as their fourth Japanese single titled "SUNDAY MONDAY -Japanese Ver.-". It was released in four versions: a limited CD+GOODS edition (A), a limited CD+DVD edition (B), a limited CD Only edition that comes with a random picture label (C), and a regular CD Only edition that comes with one randomly selected trading card of twelve types. The b-side is a Japanese version of the original Korean song "Kkochipjeom" from their second Korean album Pink Memory. 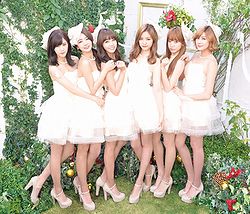