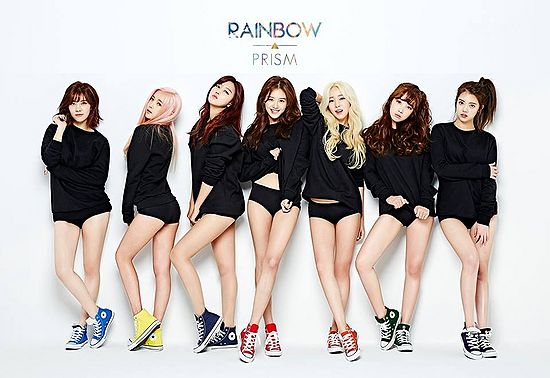 Rainbow (레인보우; レインボー) was a Korean pop girl group formed by DSP Media. In Japan, they were signed under Universal Music Japan's sublabel Universal Sigma. In October 28, 2016, DSP announced that the members' contract with the agency have expired and the group decided to not renew. Therefore, the group has disbanded. 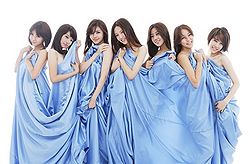 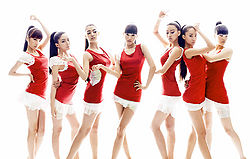 Image changes and rise of popularity

In early August 2010, DSP released a teaser picture for a new release of the group. In the photo, the members wore plain white dresses, with eyeshadow colors that matched the rainbow color assigned to each of them. In a new teaser picture, released a few days later, the members were displayed wearing two sets of outfits against two different backgrounds. In August 12, they released their first digital single, "A", with the release of the MV and first performance of the song being on the same day. One month after starting the promotions of the song, the "ab dance" featured in the choreography was banned of broadcast for being "too sexual sugestive". With that, the MV of the song was re-ranked to 19+ and the choreography was modified.

So Nyeo and Japanese debut

In April 4, 2011, DSP released the teaser of the group's upcoming promotional track, "To Me (Naegero...)", from their second mini album So Nyeo. The mini album and MV of "To Me (Naegero...)" were released in April 7. The season of spring was the overall concept for this release, and the mini album's photos featured the band members in white dresses, with a field of flowers in the background. An image portraying luxury was used for the promotion of "To Me (Naegero...)" MV, as the group sought to convey the revenge theme of the song. The song was produced by DAISHI DANCE and elements of the MV's ballet choreography were reportedly adapted from Swan Lake.

In June 21, a MV teaser for Rainbow's next song release, "Sweet Dream", was revealed, with the full version of it being released the day later, along with So Nyeo's repackaged album. The song was also produced by DAISHI DANCE and its MV was filmed using a motion control camera.

In August 2011, a Japanese website teaser of the group was revealed under Universal Music Japan's domain, which also informed that the group would debut with a Japanese version the song "A" in September 14. The single was released digitally a week earlier, in September 7. In September 8, the group topped Recochoku's chart with the music video. The group held their inaugural performance in Tokyo's Ikebukuro district, drawing a crowd of 2,000 fans, and performed “A”, followed by fifteen minutes of discussion. The song peaked at #3, with them selling 24,082 copies in its first week.

In October 31, it was announced their second Japanese single, a Japanese version of the song "Mach", being released in December 7. The physical single sold 15,506 in its first week and peaked at #9.

Rainbow Pixie, Over The Rainbow and solo projects 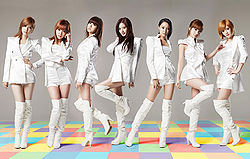 In January 3, 2012, DSP announced that the group would have their first sub-unit, formed as a trio. On the same day, a teaser image was revealed on DSP Media's website, revealing 'Rainbow Pixie' as the trio's name. In January 4, another image revealed the members of the group as Seung Ah, Ji Sook and Hyun Young. The trio released their debut song, "Hoi Hoi", a week later, in January 12.

DSP Media announced that the remainder of the group will be undertaking other projects in South Korea until further notice. Member Woo Ri was participating on the season 2 of the variety show Invincible Youth, but left the show to star in the KBS sitcom I Need a Fairy. Jae Kyung participated in JTBC's drama Monster, which premiered on April 2, 2012. On April 19, 2012, DSP Media stated that Hyun Young had been diagnosed with a vocal cord polyp and underwent surgery for its removal, further stating that, "As her schedule became busier, she had to use her voice more, which is why I think she developed the polyp". Jae Kyung also appeared in SBS' program Law of the Jungle W and Seung Ah made part of the season 1 of tvN's show The Romantic and Idol.

In November 20, their Japanese website announced that a special edition of their first Japanese album, Over The Rainbow, would be released in December 12. The new edition includes a bonus disc for the 2CD edition, with a "Korea Best Album", including eight Korean songs released, including all title tracks released until that time and some album tracks. It also included their first Japanese digital single, "CANDY GIRLS!", as bonus track of the CD2.

In February 5, 2013, it was confirmed that the group would release the first part of their first studio album, Rainbow Syndrome, on February 13. A concept photo of the album was revealed in January 29. The tracklisting of the album's first part was revealed in a "tracklist video", featring member Woo Ri rapping the songs' titles over the instrumental of Azealia Banks' song "212". The group also made a special showcase for the album on the same day of its release.

In May 22, DSP announced the release of the second part of Rainbow Syndrome on June 4, with title track being "Sunshine". Although the group was originally planned to comeback with a different image, DSP opted to continue the bright concept to give music lovers a fun song for the summer. A MV teaser for "Sunshine" was released in May 31, 2013, with the full version being released on the album's release day, June 4.

It was informed in December 2013 that the group would comeback in South Korea with a new mini-album in January 2014, but it was later revealed that the comeback is actually a debut of a new sub-unit. The unit is called Rainbow Blaxx and it is the opposite of the other unit, Rainbow Pixie, formed in 2012. The unit is composed by 4 members: Hyun Young, Seung Ah, who are also members of Rainbow Pixie, Jae Kyung and Woo Ri, and they will debut in January 20 with a special mini-album.