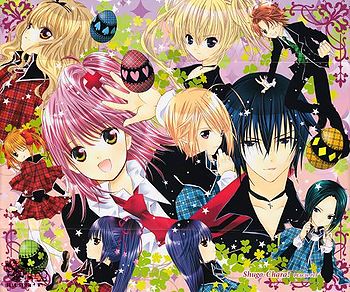 Shugo Chara! (しゅごキャラ!) is a Japanese shoujo manga series created by the manga author duo PEACH-PIT. Shugo Chara! is serialized in the magazine Nakayoshi and published by Kodansha in Japan. Del Rey has licensed the English language manga rights, releasing the first volume on March 27, 2007. It won the 2008 Kodansha Manga Award for best children's manga.

The heroine of the story, Hinamori Amu, is a student at Seiyo Elementary. At first glance, her classmates refer to her as "cool and spicy" and rumors speculate about her personal life. However, her real personality is that of a very shy girl who has trouble showing her true personality. One night, Amu wishes for the courage to show her "would-be" self, and the next morning finds three brightly colored eggs in her bed. At first, she is alarmed, but realizes she must have really wished to change. These eggs hatch into three Guardian Characters: Ran, Miki, and Su. The Guardian Characters aid Amu in discovering who she truly is and help fulfill Amu's dreams. Amu's life becomes much more complex as she struggles to deal with her "would-be" selves and the Seiyo Elementary's Guardians, who recruit Amu as the Joker to search for X Eggs and X Characters, the corrupted forms of people's dreams.

Meanwhile, the Easter Company is extracting people's eggs in search of a special egg called the Embryo. The Embryo is believed to grant any wish to the one who possesses it. However, the process creates X Eggs and X Characters. The Embryo Egg is described as a white egg with a heart and yellow wings.

Later on in the series a fourth egg, containing the Guardian Character Dia is born. She was seen infrequently as an X Egg until she was purified, at which point she would appear in times of great crisis.

The music for Shugo Chara! was released on the Pony Canyon label. The theme songs were sung by Buono!, Shugo Chara Egg!, and Guardians 4, all who were part of Hello! Project.