Three Cheers for Our Side ~Umi e Iku Tsumori Jyanakatta 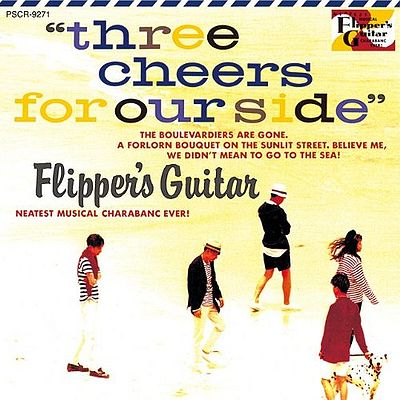 three cheers for our side ~Umi e Iku Tsumori Jyanakatta is the debut album recorded by FLIPPER'S GUITAR. It was released in CD format in 1989, followed by a Vinyl format in 1991. The record was Reissued by Polystar in 1993 and again in 2006 being released via Polystar being added to the felicity catalog. The album was followed by the release of the album-cut single "Friends Again", which featured "Happy Like a Honeybee" as the B-side. The record features Arakawa Yasunobu on drums, and he was an original member of Sonic Lollipop, and the majority of these songs are re-wored Sonic Lollipop tracks. The album's title is reference to writer Arthur Ransome's 1937 We Did Not Mean to Go to Sea.[1]

The group became well known for recording indie pop songs in English and got influence for the three cheers for our side by listening to late 1980s Britpop and Synthpop bands such as Aztec Camera and Haircut 100. The songs on the record were all given English titles, and then later given Japanese language titles. This trent was carried on by Oyamada Keigo in his solo career and by Kaji Hideki. The 2006 felicity release went on to rank on the weekly Oricon chart, peaking at #41 and staying on the chart for a total of three weeks.