Top of the World (CHEMISTRY) 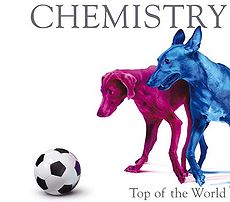 "Top of the World" is the 19th single released by CHEMISTRY. It was released two weeks after their best album ALL THE BEST. The title track was used as the FIFA Club World Cup Japan 2006 image song. "10 Minutes of CHEMISTRY" is a medley of all CHEMISTRY's songs so far. The single reached #28 on the Oricon weekly charts and charted for 5 weeks.