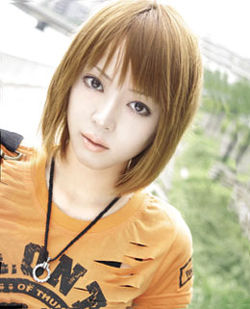 After graduating high school, Uehara moved to Osaka to live on her own. She debuted shortly after as a pop/rock singer in 2001 when she released the single "Aoi Aoi Kono Hoshi ni". It reached #9 on the Oricon and was used as the 13th ending theme for the anime Meitantei Conan, making Uehara yet another GIZA artist to have a song used in the series. A year later she released "Mushoku", her fifth single, and it hit #5 on the charts. She also wrote the lyrics for the single. An album of the same name was released two months later. However, Uehara began limiting appearances only to live performances and magazine columns.

After this hiatus, Uehara also began to write songs for other artists, including Iwata Sayuri. In December 2005, more than three years after her last release, Uehara began releasing music again, this time with a harder rock feel. In October 2006 her second album was released, along with her first book of poems. She hasn't released anything since then.

In July 2010, Uehara Azumi was expelled from GIZA studio for fraud.