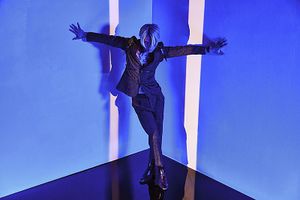 Takamasa Ishihara (石原崇雅), better known as MIYAVI (雅-miyavi-), is a Japanese singer-songwriter, guitarist, record producer, and actor, currently signed to Universal Music Japan. His debut in the music business was in 1999 as a guitarist of the Japanese rock Visual-Kei band Due'le Quartz. During his time with Due'le Quartz, he was called Miyabi, meaning elegant, but when he went solo, he changed his name to Miyavi. In 2002, MIYAVI debuted under the indies label PS COMPANY with the album Gagaku.

In 2014, MIYAVI appeared in the motion picture Unbroken, directed by Angelina Jolie and went on to undertake smaller roles in American productions such as Kong: Skull Island and Stray. Since 2013, Miyavi has been a volunteer at UNHCR, visiting refugee camps around the world. In November 2017, he was appointed an official Goodwill Ambassador. In 2019, he signed a management contract with entertainment agency LDH.

His eleventh studio album, Holy Nights, is released this week on April 22nd.