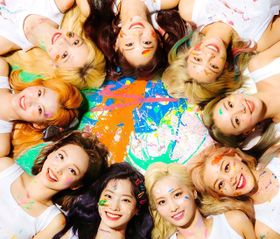 TWICE (트와이스) is a 9-member Korean pop girl group created by JYP Entertainment. Its members were decided through survival show SIXTEEN. They officially debuted on October 20, 2015 with the mini-album The Story Begins. The lead track "OOH-AHH Hage" became the most-viewed debut music video for any K-Pop group, replacing 2NE1's "Fire".

They released their second mini-album Page Two on April 25, 2016. The mini-album sold over 150,000 copies, making it the first girl group having a sales record of more than 100,000 units for that year. The lead track "Cheer Up" stayed at #1 for four weeks on the Melon Top 100 chart, stayed in the TOP 10 for seventeen weeks, ranked #1 on the yearly chart in 2016, and stayed on the chart for a full year. It also won "Song of the Year" at two major music awards shows—Melon Music Awards and Mnet Asian Music Awards.

Their third mini-album, TWICEcoaster: Lane 1, was released on October 24, 2016. The mini-album sold 165,000 copies in a week and was been recorded as the best-selling album by a girl group in 2016, beating their own record for the year. The lead track "TT" received a perfect all-kill, and its music video set multiple records for earning millions of views in the fastest amount of time. Like "Cheer Up", "TT" also claimed the top spot on the charts for four consecutive weeks. Within 19 months of their debut, TWICE had already sold over 1.2 million units of their four mini-albums and special album.

The group officially debuted in Japan on June 28, 2017 under Warner Music Japan with the release of their first compilation album titled #TWICE. The album debuted at #2 on the Oricon Albums Chart, which sold 136,157 copies within seven days, the highest first-week album sales of a K-pop artist in Japan in two years. It was followed by the release of their first original Japanese single, "One More Time", in October. With over 250,000 unit sales, TWICE became the first Korean girl group that earned Platinum certification by the Recording Industry Association of Japan (RIAJ) for both album and CD single in the same year. The group ranked third in the Top Artist category of Billboard Japan's 2017 Year-End Rankings.

Their sixth Japanese single, "Fanfare", is released this week on July 8th.