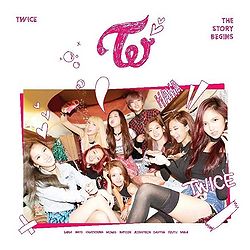 The Story Begins is the debut mini-album released by TWICE. The song "OOH-AHH Hage" was used as the lead track.

Despite being a Korean release for the group, the mini-album still managed to chart on the Japanese Oricon chart. It peaked at #46 on the weekly albums chart and has charted for a total of 48 weeks, selling 48,425 copies to date.