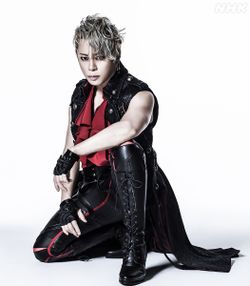 Nishikawa Takanori (西川貴教) is a prolific Japanese pop-rock artist commonly known under his solo project monikers, most famously as T.M.Revolution (Takanori Makes Revolution or T.M.R.) and more recently as Takanori Nishikawa. He is also known for his other acts such as the band abingdon boys school as well as his song contributions to the popular anime Rurouni Kenshin and Mobile Suit Gundam SEED series. He was also the first artist to be signed to Tofu Records promoting Japanese artists in North America.

Prior to being T.M.Revolution, Nishikawa was a member of the visual-kei band Luis-Mary which disbanded in 1993. In 1995, Asakura Daisuke signed Nishikawa on the FunHouse label and released a first single "BLACK OR WHITE?" as Asakura Daisuke expd. Nishikawa Takanori. Soon after this, the official announcement of the formation of the T.M. Revolution project was released on March 22, 1996. His fifth single, "HIGH PRESSURE", broke through the top ten on the Oricon weekly albums chart. Soon after that, his single "WHITE BREATH" secured the #1 spot, and, less than a month later, his third album triple joker also secured the #1 position.

On August 31, 2016, he released his final single as T.M.Revolution, "RAIMEI", which was used as the opening theme for the live-action puppetry collaboration between Japan and Taiwan, Thunderbolt Fantasy. A year later, he released the digital single "BIRI x BIRI" collaborating with Sueyoshi Shuta from AAA, which marked his first released that uses his real name.

His ninth digital single under his real name, "As a route of ray", is released this week on December 30th.