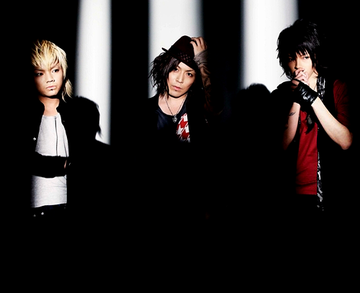 kannivalism is a three member Japanese rock band from Kanagawa Prefecture. They started out as a visual-kei group and first formed sometime in the summer of 2001. After their one-man live at Meguro Rockmaykan on June 20th, 2001 kannivalism disbanded. Four years later, in December, the group reformed and changed their look to a more mainstream one. They have a catchy, upbeat quirky jazz-like sound, like Ryo and Kei's previous band baroque.

kannivalism formed sometime during the summer of 2001 in Kanagawa Prefecture. Not a lot of specifics are available pertaining to their schedule around this time, other than they disbanded on June 20th after their one-man live at Meguro Rockmaykan and then released their debut single "Ittekimasu." on July 29th. The member line-up was Ryo (ex-Clarity) on vocals, K (ex-Clarity) on guitar, 8342 (ex-Silhouette) on bass, and Kiri (ex-Rougir La Neige) on drums. In June of 2001, after seeing them live AKIRA (ex-Shiver) asked Ryo to join his new band called baroque with Bansaku (ex-After effect). Ryo accepted and then asked K if he wanted to be the new band's second guitarist. With both of the members accepting the offers, kannivalism disbanded. 8342 went to join k@mikaze and Kiri joined Porori.

After three years, baroque disbanded on December 25th, 2004. A year later Ryo and Kei announced that they were reviving kannivalism and 8342 joined the band again, under his new name Yuchi. Their first release since their debut single five years ago is Soukou humority, a mini-album that was released on April 26th, 2006. It was released through Free-Will's sub-label and their current management ism. The mini-album reached #18 on the Oricon weekly charts, where it charted for two weeks. After its release kannivalism signed with avex trax and released their major debut single "Ritori" five months later on September 27th.