Difference between revisions of "A Shared Dream (album)"

"A Shared Dream" is U-Kiss's first Japanese album. It was released in four versions: a limited CD+DVD edition and three CD only editions, regular, mu-mo edition, and a Tower Records edition. The album includes the Japanese versions of "Man Man Ha Ni", "Bingeul Bingeul" and "Shikkeureo!!", retitled to "Shut Up!!". The first press of the CD+DVD edition include a making of for the music video of "A Shared Dream". The album was released on the same day as their second Japanese single, "Forbidden Love". The tittle track, , was previously released as digital single on 14th February. 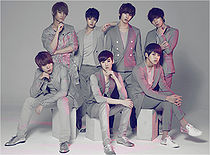