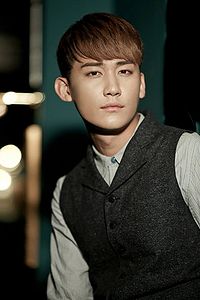 AJ is a Korean Pop rapper. He is a former member of the group U-Kiss and its sub-unit uBEAT. He joined U-Kiss in March 2011 through their fifth mini-album Bran New Kiss. He originally debuted in 2005 with the group PARAN. In July 2012 it was announced that he was admitted into Columbia University and he would be on hiatus until 2013. He returned to the group with the release of their third Korean album COLLAGE.