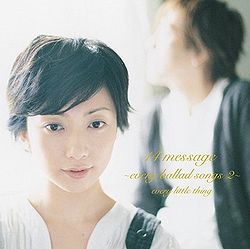 14 message ~every ballad songs 2~ is the fifth best album released by Every Little Thing. It celebrates the tenth anniversary of the group's debut. The album includes all their singles, live recordings, and fan-selected tracks spanning their complete history of ballads. The limited edition includes a tenth anniversary booklet full of photographs and interviews. The album reached #2 on the Oricon weekly charts and charted for 10 weeks, selling 117,000 copies.