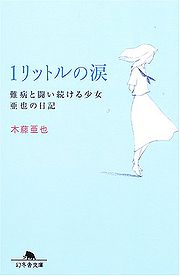 1 Litre no Namida the Book

1 Litre no Namida (Ichi Rittoru no Namida) (１リットルの涙; One Litre of Tears) is a dorama based on the diary of Kitou Aya (known in the drama as Ikeuchi Aya, played by Sawajiri Erika), a girl who was diagnosed with Spinocerebellar Degeneration disease (Also known as Spinocerebellar Ataxia - SPC). The drama aired from October 11th, 2005 to December 20th, 2005 on Fuji TV and consisted of 11 episodes. It had an average viewership of 15.31%. The theme song was Only Human by K and inserts songs were Konayuki and 3gatsu 9ka by Remioromen. Also, a choral arrangement of 3gatsu 9ka was included in the drama.

Aya is a normal 15 year old attending one of the top high schools in Japan, but soon she finds herself stumbling, dropping things, and eventually falling with serious consequences. She is diagnosed with a severe case of Spinocerebellar Degeration Disease, which is progressing very rapidly. As her disease progresses, Aya and her family face more and more problems and yet try to remain happy, overcoming each obstacle as it occurs. The drama follows her from before her diagnosis until she was unable to write any more through many troubles at school and her constant wondering whether or not she would be able to marry and live a normal life. It also focuses on the effect the disease has on her family, friends, and classmates, and in particular her mother, Ikeuchi Shioka (Yakushimaru Hiroko), and friend and love interest Asou Haruto (Nishikido Ryo).

Before the TV drama, 1 Litre no Namida was first adapted into a film. The film was released in 2004 with all the last names of the original people in the book being retained. Kitou Aya was played by actress Oonishi Asae (who is also in the TV series as Ikeuchi Aya's senpai and roommate in the Disability School)

The movie is now currently being played on Continental Airlines flight from United States to Japan with English subtitles. The film was given an international title of A litre of Tears