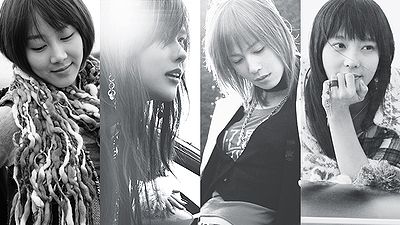 Chun Sang Ji Hee The Grace (天上智喜 (천상지희)), known as TENJOCHIKI (天上智喜) in Japan, is a 4-member female Korean Pop/A Capella group formed by SM Entertainment. Their former stage name was TSZX (Tiān Shàng Zhì Xǐ), which was simplified for the Korean pronunciation as CSJH (Chun Sang Ji Hee). In 2006 the group added "The Grace" to their stage name.

The group consists of former soloist Dana, Lina (formerly known as Jiyeon) from duet Isak N Jiyeon, soloist Sunday, and Stephanie who was picked-up through auditions in the United States.

In July 2011 after a two years hiatus, sice the release of their second Japanese album Dear... (2009), the group's comeback was announced by SM Entertainment. It was later revealed that the group would comeback as a two member unit under the name Chun Sang Ji Hee Dana & Sunday. 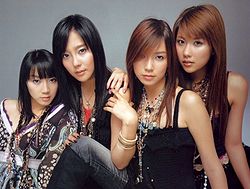 Prior to the group's official debut in April 2005, the four girls sang a song together on the album 2004 Summer Vacation in SMTOWN.com. The song wasn't credited to the group, each member was credited individually.

Like many of their fellow SM Entertainment artists, the group aim to take all of Asia by storm, focusing on Korea, Japan, and China. Helping them in their goal are the multilingual skills of their members: Stephanie is fluent in English, Sunday is fluent in Japanese, and Dana and Lina were studying Chinese, with Dana majoring in the subject.

As benchmarks in their goal of reaching all of Asia, the group had their debut performance in China on April 29, 2005 with the single "Too Good". The single was not successful, and the group soon began to perform their second song, "Boomerang", which had a sexier image and allowed them to also show their dancing skills. In March of 2006, a Chinese version of their first single was released, with Chinese versions of "Too Good" and "Boomerang", as well a Chinese version of the song "Baram (Fight To The End)", originally one of Dana's solo songs, which was re-recorded by the four women before officially becoming a group, for the 2004 Summer Vacation in SMTOWN.com album. 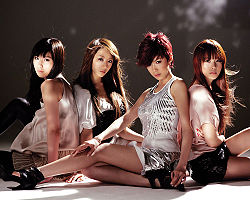 After the promotion in China, Cheon Sang Ji Hee The Grace moved onto Japan. The group announced that they would be releasing their debut Japanese single at the end of January, 2006. "Boomerang" was re-recorded with Japanese lyrics, and the single included "Do You Know?", a solo song by Sunday.

For their second single, "The Club", the group released it simultaneously in Japan and Korea. The Japanese release of "The Club" featured Japanese rapper SEAMO, while the Korean release featured Korean R&B star Rain. The singles sold poorly but they continued to work and released their third Japanese single "Sweet Flower".

Like the previous two singles, "Sweet Flower" also included a solo track by one of the members and this time it was Lina and her song "Rock'n'Roll Star". "Sweet Flower" was used as the April opening theme for the TBS show CDTV and sold less than the previous singles ranking at #151 on the Oricon charts and selling 572 copies. "juicy LOVE" was the next single to be released, featuring Japanese reggae singer CORN HEAD. The single was coupled with "Sayonara no Mukou ni", a ballad written and sung by Dana. 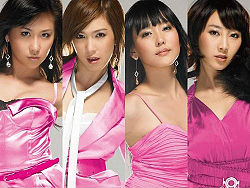 The group returned to Korea to release their third Korean single, "Yeoljeong (My Everything)". They underwent a slight name change to Chun Sang Ji Hee The Grace. The girls' individuals stage names also changed. Instead of having the individual Chinese names attached to their names, they changed them to "Stephanie The Grace", "Lina The Grace", "Sunday The Grace", and "Dana The Grace". The change was made to "emphasize the image of an A Capella group based on abundant ability and fantastic harmony".

On May of 2007 Cheon Sang Ji Hee The Grace released their first full-length Korean album, Hanbeon Deo, OK?. After the promotions, the group returned to Japan to release their fifth single, "Piranha". It sold better than their previous singles, ranking at #50 on the Oricon charts and selling 2,466 copies in Japan and 2,170 in South Korea. In November they released their first full-length Japanese album, Graceful 4. 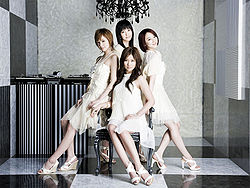 During 2008, the group released another single entitled "Stand Up People" which was used as the ending theme for the TV show Downtown DX. It ranked #49 on the Oricon charts and sold 2,280 copies.

After three months Tenjo Chiki did a collaboration with the group CLIFF EDGE and released a new single, "Here". It was used as the theme song for the movie Homeless Chuugakusei and as the opening theme song for the TV show Sakigake! Ongaku Banduke ~JET~. It ranked #18 on the Oricon charts and sold 16,076 copies, making it their most successful single so far.

2009 started with their second Japanese album, Dear..., which included the singles "Stand Up People" and "Here". One of the songs of the album, "Sukoshi de Ikara", was used in Subaru movie. The album did better than Graceful 4 by ranking at #37 on the Oricon charts and selling 4,734 copies.