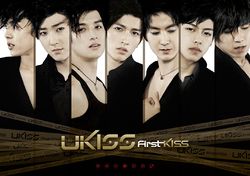 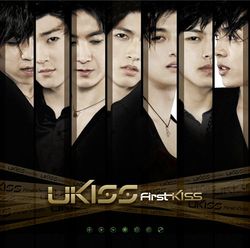 First KISS is U-Kiss's first Japanese best album, which compiles songs from their Korean discography. It was released in two editions, 2CD+DVD and 2CD edition. First CD includes the first five songs from their first Korean album U-Kiss Only One Album, and all the regular tracks (not including intros or/and instrumentals) from their Korean mini-albums New Generation, Bring It Back 2 Old School and Conti Ukiss, all in reverse chronological order. Second CD includes the regular tracks of their fourth Korean mini-album BREAK TIME, released only two months earlier. The DVD compiles the three latest music videos from the group at the time and additional bonus footage. Although some titles were translated into Japanese or English, all the tracks are the original Korean songs.