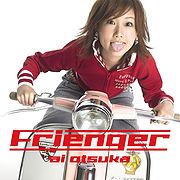 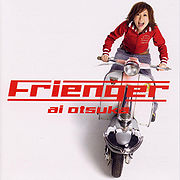 "Frienger" is Otsuka Ai's eleventh single. The main track was used as the CM song to the "au" mobile service Toshiba MUSIC-HDD W41T, as well as being the theme song to the TV show "SPORTS Uruguzu". "Amai Kimochi Maru Kajiri" was used as the music.jp CM song. The title is a Portmanteau between the English words 'Friend' and 'Ranger', making 'Frienger'. The single was released in two versions: a CD+DVD version and a CD only version, both featuring obi in five different colours. As this single sold 173,115 copies in 2006, it was the #60 single of the year. The single reached #2 position and charted for 19 weeks. It sold a total of 173,115 copies in 2006, becoming the #60 single of 2006.