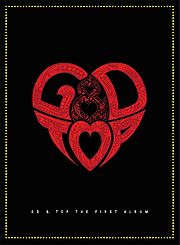 HIGH HIGH is BIGBANG' unit GD&TOP's first album. It features both joint tracks and solo songs. The title track "HIGH HIGH" and "OH YEAH" were released digitally before the album's release on December 15. Those two songs, along with "Ppeogigayo", were used as the first three lead tracks. "Jibe Gajima" and "BABY GOOD NIGHT" were also used as the second batch of lead songs (with music videos produced for both), making a total of five lead tracks (or all the joint songs). The album's cover logo comes in (randomly selected) five different colors; silver, gold, purple, green and blue.

In February 2011, two months after the Korean release, a Japanese edition was also released. This edition included a DVD with three music videos and photocards, additionally first press editions come also with a poster.

In June 29, it was announced that the production for the album was halted and the album would be released since July with a new cover (HIGH HIGH (New COVER Ver)). This announcement was made after a request made by Playboy Enterprises regarding the use, without permission, of a modified version of the company's logo for the album cover. Except for the cover art, the album was re-released without any other modifications.