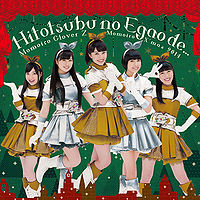 "Hitotsubu no Egao de... / Chai Maxx Zero" is the 6th limited edition single and 5th Christmas single released by Momoiro Clover Z The single was announced on December 7, 2014, following the practice of their limited releases in every Momoiro Christmas live concerts. Hitotsubu no Egao de… is the theme song for this Christmas concert and Chai Maxx ZERO was used in the commercial for comico, a digital-manga-reader smartphone app in August. This limited single will only be sold at the concert venue, public viewing theaters, and on KING RECORD’s Internet shopping site "KING e-SHOP” from 9:00pm Christmas Day.