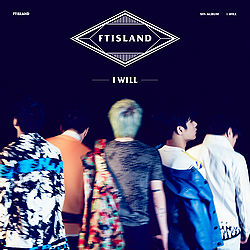 I WILL is FTISLAND's fifth Korean album. The song "PRAY" was used as lead track. It is the first Korean album produced by the band members. The album includes three Korean versions of their Japanese songs, "Black Chocolate", "Time To", from the Japanese album RATED-FT and "To The Light", which was released a week earlier as a pre-release track from the album.