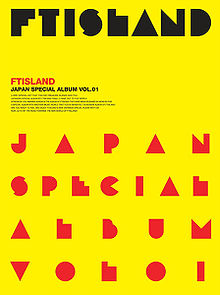 JAPAN SPECIAL ALBUM VOL.1 is FTISLAND's special Japanese album for Korea. The album compiles in one disc their full Japanese mini-album, Prologue of FTISLAND -Soyogi-, and their Japanese debut single "The One". The album follows the same tracklist order as the original releases with the addition of the instrumental version of "The One", which wasn't included on the Japanese single.