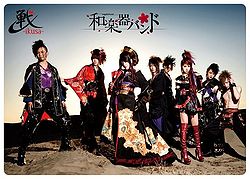 "Ikusa / Nadeshiko Sakura" is the third video release and second Music Video single released by Wagakki Band. It comes in six versions: a DVD edition, a Blu-ray edition, a limited Amazon DVD edition, a limited Amazon Blu-ray edition, a DVD+GOODS edition, and a Blu-ray+GOODS edition. The "+GOODS" versions come with a 3D jacket specification, a special original fan (the design used by Suzuhana Yuuko in the Music Video for "Ikusa"), and a "Sengoku Musou 4-II" x Wagakki Band special product code that can be used in the game Sengoku Musou 4-II to receive a special weapon and the use of "Ikusa" as a combat song.