Lee Ki Kwang (이기광) is a South Korean artist under Around Us Entertainment. He is a member of the Korean pop boy group Highlight, and of the one-time unit Dynamic BLACK. He originally debuted as a solo singer under the stage name AJ.

Lee Ki Kwang was a trainee of JYP Entertainment for four years. In early 2009 he moved to JYP's Cube Entertainment and officially debuted in April 2, with the mini-album First Episode: A New Hero under the stage name of AJ, which stood for "Ace Junior". He was dubbed by the Korean media as the second Rain.

Only six months after his debut it was announced that he would be part of a new group, BEAST, and his solo activities were put on hiatus. 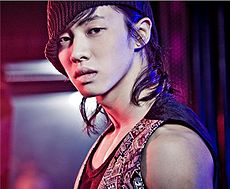