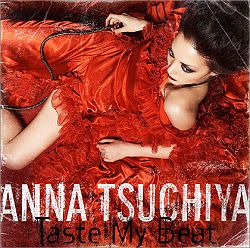 Taste My Beat is Tsuchiya Anna's first mini-album. "Taste My Skin" was used as a radio single for promotion and had a PV to air on television. "in my hands" was used in a Venus Jean CM song while "Somebody Help Me" was featured as the ending theme of the Japanese version of the television program Tru Calling. Several western rock musicians assisted Anna with her album like, Josh Freese from A Perfect Circle on Drums, Justin Meldal-Johnsen, a backup from Beck, on Bass and Michael Ward, guitarist from Avril Lavigne, on Guitar. The mini-album reached #28 on Oricon charts, stayed on the charts for six weeks and sold more than 21,051 units.