From generasia
(Redirected from UVERworld Documentary The Song)
Jump to: navigation, search 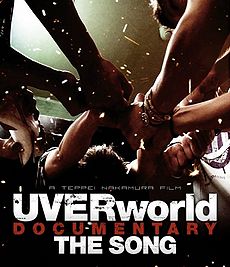 UVERworld DOCUMENTARY THE SONG is the ninth DVD and fifth Blu-ray released by UVERworld. This is their first documentary film. The limited DVD edition includes deleted scenes, behind-the-scene footage and "after THE SONG". It also comes with a bonus soundtrack CD. The film was directed by Nakamura Teppei who teamed up with UVERworld for their "BABY BORN & GO" and "KINJITO" music videos. The documentary focus on UVERworld's live concerts and what goes on behind the scenes. It shows where the members first met, the town they lived in upon moving to Tokyo and what made their debut possible.