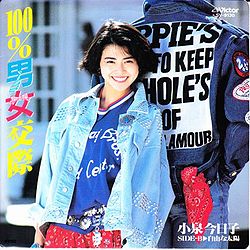 The song was re-issued in 1991 with "Nantettatte Idol" as the A-side.