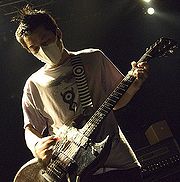 Agata Ichirou (阿形一郎) is a Japanese noise rock guitarist and the guitarist of MELT-BANANA. In 2004 he released his first solo album Spike. He is known for consistently wearing a surgical mask on stage during performances, which he later admitted he wears is because he is prone to nosebleeds and has cotton balls plugging his nose under the mask.