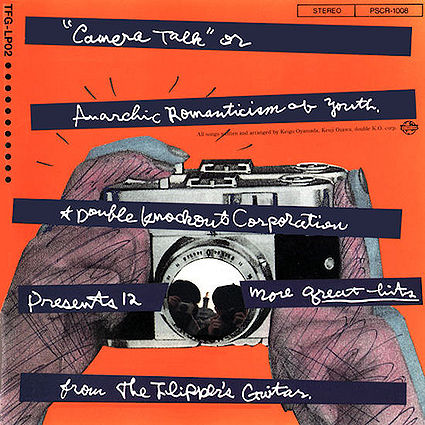 CAMERA TALK is the sophomore studio album recorded by FLIPPER'S GUITAR, and is Oyamada Keigo and Owazi Kenji's first record as a duo. It was written, arranged, produced by DOUBLE KNOCKOUT CORPORATION and they also did the recording for the synthesizer and drum programming.[1] It features Yoshié supplying the drums, congas, timbales, tambourine, percussion, and drum programming. This is technically their first original album since three cheers for our side was made up of reworked Lollipop Sonic demos.[2]

With CAMERA TALK Ozawa and Oyamada really evolved their style. three cheers for our side had a very British sound, with the song being written in English and being influenced by Britpop and Synthpop. Instead for this record they group created a very diverse sound including elements of Latin music, bossa nova, vocal jazz, house music, and spy thriller themed instrumentals.[3]

Rolling Stone Japan ranked CAMERA TALK as #38 of the 100 Greatest Japanese Rock Albums.[4] The 2006 felicity release managed to reach #37 on the weekly Oricon chart, and continued to rank for a total of four weeks.