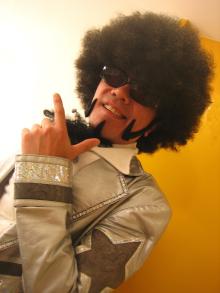 DANCE☆MAN is a Japanese musician.

DANCE☆MAN started his career in 1998, and has since established a rather lengthy and successful career centered around re-arranging 70's and 80's American disco, funk, and boogie songs and replacing the lyrics with often humorous Japanese lyrics. He also makes his own original songs, heard on his albums and singles. His career started by being signed with avex and releasing singles and albums, but in 1999, he began a career arranging and re-arranging music written by popular Japanese composers, beginning with the single LOVE Machine by Morning Musume, which had very large popularity and got DANCE☆MAN's name known in this business.

DANCE☆MAN is very secretive about his identity to the public, as he is never seen without wearing a large afro hairstyle wig and sideburns with large sunglasses and does not release his personal info on websites or in CDs. He performs and records with a band who he aptly names "THE BANDMAN," consisting of 8 musicians and backup vocalists. DANCE☆MAN currently works for Konami, writing and arranging songs for the popular video game Beatmania IIDX.