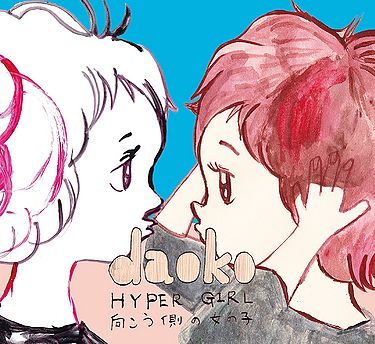 HYPER GIRL -Mukougawa no Onna no Ko- is the first studio album recorded by daoko. It was released six months after her debut EP Shoki Shojo with the indie label LOW HIGH WHO? PRODUCTION. The first press edition comes with a special music card bonus with a download code for a bonus track, "Yume no Ato". At the time of release it was possible to order a 12-page zine (A6 size) containing artwork by daoko. A very small photo of daoko was included on the back of the CD's obi. It showed her profile with her hand partially covering her face, wearing thick-rimmed glasses. This is the first time her face was shown in any of her official release. The HYPER GIRL artwork was drawn and designed by Paranel who also worked as the producer, mastering and mixing the album. The artwork inside the lyric booklet was drawn by daoko herself. The album did not rank on the weekly Oricon chart.

Many of the songs were later used on the 2015 bonus CD INDIES BEST, from the limited edition release of DAOKO's major label self-titled debut album.