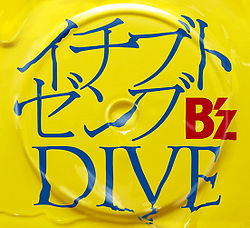 "Ichibu to Zenbu / DIVE" is B'z' 46th single. "Ichibu to Zenbu" was used as the theme song for the dorama Buzzer Beat ~Gakeppuchi no Hero~. "DIVE" was the SUZUKI "SWIFT" CM song. This is their second double a-side single, after Mienai Chikara ~INVISIBLE ONE~ / MOVE in 1996. The single topped the Oricon weekly charts and sold 377,516 copies in 2009, making the #6 single of the year. The song was also a digital success, being certified Million for ringtone downloads of over 1,000,000, Triple Platinum for full song cellphone downloads of over 750,000, and finally Platinum for PC downloads of over 250,000.