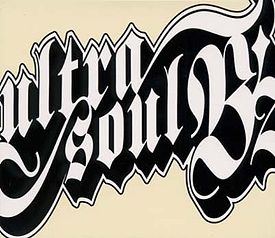 "ultra soul" is the thirty-first single released by B'z. The title track was used as a theme song for the The World Swimming Convention in Fukukoka. It reached #1 on the Oricon charts and charted for twenty-three weeks, selling 876,000 copies. It reached #11 the yearly Oricon charts for 2001. In 2011 the RIAJ certified the title track as Gold for full song cellphone downloads of over 100,000.