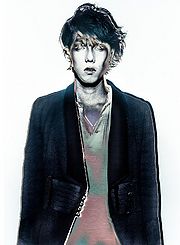 Noda Yojiro (野田洋次郎) is the vocalist/guitarist for the Japanese rock band RADWIMPS and actor. He started his own solo career since 2013 under the name illion. He has lived in the United States for a long time, so is able to understand and speak English.