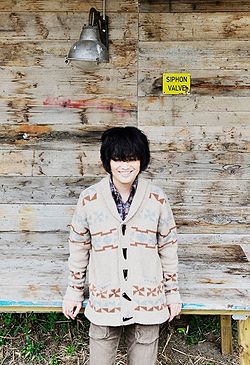 Yamanaka Sawao (山中さわお), is a Japanese rock singer, guitarist, songwriter and composer. He is well known as the lead singer and guitarist of the band the pillows. He also writes and composes all the songs by the pillows.

Yamanaka Sawao grew up listening to punk rock. In 1988 he began singing and playing guitar for the group the Coinlocker Babies in Hokkaido with Manabe Yoshiaki, Ueda Kenji and Sato Shinichiro and recorded a demo tape called "Pantomime".

In 1989 he renamed the group the pillows and after re-recording some of the music from their earlier demo they signed with Pony Canyon and came out with their first major release MOON GOLD in 1991. Since then they have released many successful albums and singles.

Yamanaka Sawao became friends with JIRO of GLAY after he met him at one of his concerts with his band the pillows. In 2004, JIRO and Sawao met Nakayama Shinpei from STRAIGHTENER. Eventually JIRO and Sawao asked Shinpei if he wanted to form a band together, and formed the band THE PREDATORS in 2005.

In 2013 Sawao released his first single, "Answer", this time he sang in Japanese apart from him singing in all English like in his previous releases. Less than one month later he releases his third album Hakaiteki Innovation.