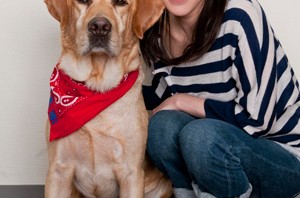 TV Tokyo’s animal variety show “Pet Daishuugou! Pochitama,” which was on the air from 2000 to 2010, will have its “Masao-kun ga Iku!!” segment turned into a theatrical film. The movie, titled “LOVE: Masao-kun ga Iku!,” will star SMAP member Katori Shingo, with Hirosue Ryoko as the female lead.

The movie is based on the life of comedian Matsumoto Hideki, who worked with the popular Labrador retriever Masao-kun before the dog died of cancer in 2006. Katori will play Matsumoto, an unsuccessful young comedian who one day meets Masao-kun and matures through their various experiences together. Hirosue will play the part of his girlfriend Satomi.

The story revolves around Matsumoto as he gets an offer to appear on an animal show. At first, he is enthusiastic about his work, but he is soon disappointed by the reality of being on a show where a dog is the star. Being used by Masao-kun, desperately trying to garner laughs from the audience, losing his comedy partner, and being dumped by his girlfriend whom he was living with, nothing seems to go right for Matsumoto.

One day, when Matsumoto gets injured on location, Masao-kun races to help him, and at that point he decides to form a duo with the dog. Things start going well for the show as they both rise in popularity. But one day, Masao-kun’s health turns poor, and he is diagnosed with illness. Around the same time, Matsumoto also hears a rumor that Satomi has returned to her home in the countryside and is about to get married.

Otani Kentaro (“NANA”) is directing. Filming has been under way since last month and is expected to finish in December. Theatrical release is scheduled for June 23, 2012.

D – in the name of justice