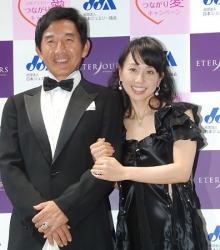 Actor Ishida Junichi (58) and professional golfer Higashio Riko (36) have just celebrated the birth of their first child. On November 6, Higashio updated her blog to announced that the baby boy was born on Monday night.

Ishida and Higashio have been married since December 2009. This past March, the couple announced that they had successfully conceived, after Higashio had been undergoing infertility treatment. According to Higashio’s blog entry, she began in vitro fertilization last November, and the fertilized egg was placed in her womb on February 20. She was confirmed pregnant one week later.