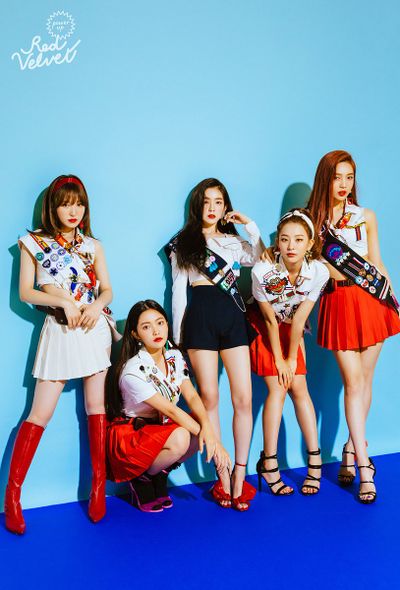 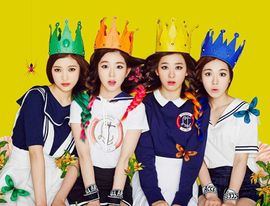 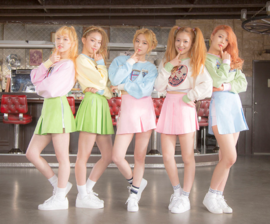 The group started promotions on music shows on March 19 and also promoted the album through the program Ice Cream TV, which was streamed through Naver Music and was hosted by SHINee's Minho. On March 15, it was announced that both "Automatic" and "Ice Cream Cake" would be promoted as double lead songs off the album. The music video for "Ice Cream Cake" was released on March 15. Ice Cream Cake topped Gaon's Weekly Album Sales Chart in its first week. It also debuted at #2 on Billboard's World Albums Chart and "Ice Cream Cake" peaked at #3 on Billboard's World Digital Songs Chart, while "Automatic" peaked at #9. On March 27, they won their first music show trophy on Music Bank. 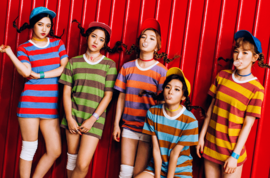 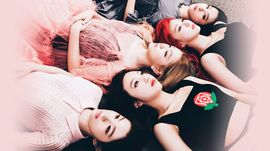 The Red & The Velvet

Red Velvet's first full-length album, The Red, was released on September 9, 2015. Jeff Benjamin of Billboard K-Town highly praised the album. The album debuted at #1 on Billboard's World Albums Chart and South Korea's Gaon Album Chart, and also appeared in Billboard's list of the "10 Best K-Pop Albums of 2015". Its lead track "Dumb Dumb" peaked at number three on Billboard World Digital Songs chart, making it the best-selling K-pop song in America of the week. The single also topped the list of the "Top 20 K-pop Tracks of 2015" by Dazed. The music video for the song was included as the only non-English language entry in Rolling Stone's "10 Best Music Videos of 2015". On December 18, the group took part in S.M. Entertainment's special winter project Winter Garden releasing the digital single titled "Winter Garden 2". Red Velvet's second mini-album The Velvet was released on March 17, 2016. The album showcased the smooth "velvet" side of the group. It was a follow-up album to The Red, which highlighted the group's bright and bold "red" persona.

Red Velvet's second mini album The Velvet was intended to be released on March 16, 2016, but ten minutes before its scheduled release, S.M. Entertainment announced that the music video and album's release would be delayed "to guarantee a high quality of work". The album and its title track "One of These Nights" (Korean title: 7월 7일) was released on March 17. The album showcases the smooth R&B-influenced "velvet" side of the group's concept and is a direct follow-up album to The Red, which highlighted the group's bright and bold "red" persona. 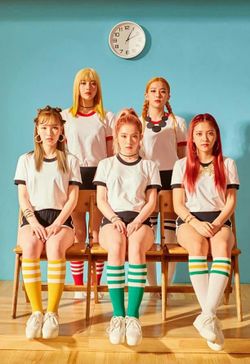 In May, various news sites in South Korea reported that the group was preparing to release a summer album. Despite this, it was postponed several times but the group eventually released their third extended play Russian Roulette on September 7. The album contains seven tracks, with the lead single titled "Russian Roulette". On September 13, 2016, Red Velvet took their first music show win for Russian Roulette on The Show. The title track peaked at number two on the Gaon Digital Chart and Billboard's World Digital Songs chart, making it their highest rankings on both charts at the time. 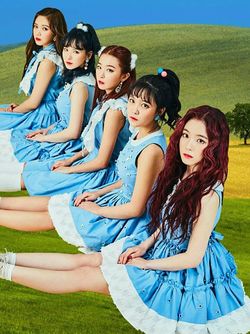 On February 1, 2017, Red Velvet released their fourth mini album, Rookie. The EP contains six tracks including the title track "Rookie", and a solo track by Wendy entitled "Last Love" (마지막 사랑). The album topped the Weekly Gaon Album Chart as well as the Billboard World Albums Chart. The group took their first music show win for "Rookie" on The Show on February 7, followed by wins on Show Champion, M Countdown, Music Bank, and Inkigayo.On March 31, the group released the first single for SM Station 2, titled "Would U". For further promotions, from July 27 to September 10, Red Velvet starred in their first reality television program, Level Up Project which showed footage of the girls' trip to Thailand. It lasted for 23 episodes and was filmed without member Joy who was busy at the time shooting the drama The Liar and His Lover where she was the female lead.

On July 9, Red Velvet released their fifth EP The Red Summer with the title track "Red Flavor" (빨간 맛), which marked their first summer release.The EP was a commercial success, again topping the Gaon Album Chart and the Billboard World Albums Chart. This was their third #1 release and set the record for most #1 albums on the chart by a K-pop girl group. Additionally, "Red Flavor" debuted atop the Gaon Digital Chart and Gaon Download Chart with the other four songs also charting in the Top 50 of the Digital Chart. 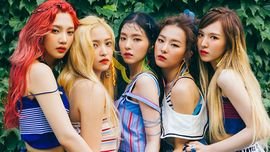 Between August 18–20, the group held their first solo concert titled "Red Room" to an audience of 11,000. Although it was initially planned to be a two-day concert, another date was added due to demand. On October 4, SM Entertainment announced through their Japanese website that the group would have their first showcase in Japan. "Red Velvet Premium Showcase F'U'N Room Reveluv-Baby Party" took place at the Yebisu The Garden Hall in Tokyo on November 6. There, they performed the Japanese versions of their Korean songs "Dumb Dumb" and "Red Flavor" for the first time. After wrapping up the showcase, it was officially announced that Red Velvet's concert "Red Room" would be taken to Japan in 2018. It is planned to take place in March 28 and 29 at the Musashino Forest Sports Plaza, a 10,000-seat capacity venue that will later be used for the 2020 Tokyo Olympics. 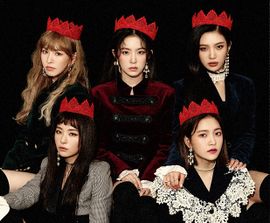 Red Velvet revisited their "velvet" image by releasing their second full-length album Perfect Velvet on November 17 with the lead single "Peek-a-Boo". Unlike their first "velvet" release, the album and single were both commercially successful. The album peaked atop Billboard's World Album Chart. "Peek-a-Boo" peaked at #2 on Billboard's World Digital Songs chart, tying with their 2016 single "Russian Roulette". In South Korea, the album and the single "Peek-a-Boo" both charted at #2 on the Gaon Album Chart and Gaon Digital Chart. Through the release of Rookie, The Red Summer and Perfect Velvet all in the same year, along with the popularity of the single "Red Flavor" (which according to Jung Ji-won of Osen best represents the year of 2017), and the success of their albums overseas, Red Velvet achieved a "top girl group" status in South Korea, which was cemented further when Perfect Velvet sold over 100,000 copies and "Peek-A-Boo" won on the music program Inkigayo on their last day of promotions for the song, proving its longevity on the charts.

The group released their first repackaged album, The Perfect Red Velvet, on January 29, 2018. This included three new tracks in addition to all the songs from Perfect Velvet, with the single "Bad Boy" promoted as its title track. 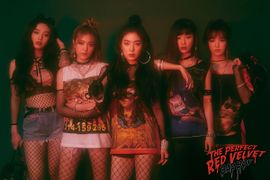 The album topped the Gaon Album Chart upon its release while "Bad Boy" debuted at #1 on Gaon's Download Chart and at #2 on the Gaon Digital Chart. The Perfect Red Velvet also charted at #3 on Billboard's World Albums chart while "Bad Boy" debuted at #2 on its World Digital Songs chart. Red Velvet also entered the Top 10 of Billboard's Social 50 chart for the first time, charting at number nine. The album also marked the first time the group has appeared on the Canadian Hot 100 and charted at number 87, becoming only the seventh K-pop artist and the third female act to appear on the chart. Red Velvet promoted the song on various South Korean music shows, earning their first music show win for "Bad Boy" on February 8 on Show Champion. 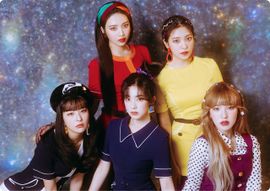 On March 20, 2018, it was announced that Red Velvet would be performing alongside other selected South Korean artists for an inter-Korean concert in Pyongyang, North Korea. This makes them the first artist from SM Entertainment in fifteen years since Shinhwa to perform in North Korea. On March 30, the group announced that they will be officially debuting in Japan in July through a song release. On April 29, 2018, Red Velvet held their first fan meeting in Chicago, to an audience of 4,000. The event was held at Rosemont Theater, and also, notably, the first solo performance from a female K-pop group in the United States since 2016. On May 23, it was revealed that their debut Japanese EP is titled #Cookie Jar (read as Hashtag Cookie Jar). It was released on July 4, 2018 by the label Avex Trax, and included six new songs including the Japanese versions of "Dumb Dumb", "Russian Roulette" and "Red Flavor". The songs also include “#Cookie Jar” ,”Aitai-tai” and “‘Cause it’s you”. The EP debuted at the third spot of the Oricon Weekly Albums chart and sold 26,124 copies on its first week of release in Japan. 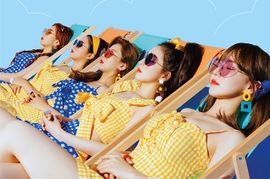 On July 19, 2018, Red Velvet announced they would be making a comeback soon, and they had filmed their music video outdoors in Gyeonggi-do. The songs from the new album will be performed on Red Velvet's upcoming concert Redmare. On July 23, 2018, it was announced that Red Velvet will release their second summer-special EP Summer Magic on August 6, 2018. The EP will contain seven tracks, including one bonus track.