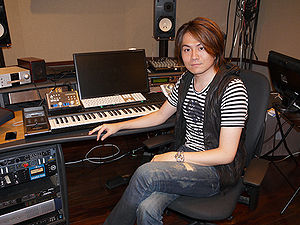 He is one of the leading composers and arrangers of the singer & seiyuu Mizuki Nana since 2004. The first song he composed for her was "Tears' Night" who can be found on her ALIVE & KICKING album's. Since then Noriyasu Agematsu has been responsible of number of the most popular songs of the singer like the hugely popular among the fans of anime and Anison "Eternal Blaze". He also composed and arranged tracks on Nana Mizuki's singles "SECRET AMBITION", "MASSIVE WONDERS", "SUPER GENERATION", "Trickster", "Shin'ai" and albums HYBRID UNIVERSE, ULTIMATE DIAMOND and most recently "ROCKBOUND NEIGHBORS" and for many others...

All credits are for lyrics, music, and arrangement unless otherwise specified.