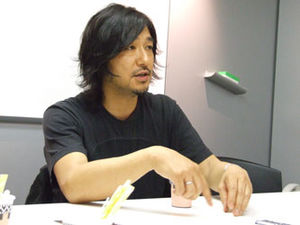 Aida Shigekazu (會田茂一) is a Japanese rock musician. He releases solo music under the name FOE. He is also a well known producer, best known for his work with Kimura Kaela.

Aida first started working as a guitarist in 1989 while enrolled in the Meiji Gakuin University. It wasn't until 1991 that he joined his first band, the Shibuya-Kei group EL-MALO. The band disbanded in 1997. Along with Asamoto Hirobumi from MUTE BEAT, Aida formed Ram Jam World in 1993. Though only after a few releases the project was put on hold. After Aida left EL-MALO, he returned to his work with the band.

During 2003, Aida's activity increased with working with two bands. One band with Nakamura Tatuya from BLANKEY JET CITY, called LOSALIOS. The other with Toshitaka Kuwakei from GREAT3, called HONESTY.

Note: This is an incomplete list of songs featuring work by Aida Shigekazu.

This article is a stub. You can help generasia by expanding it.
Retrieved from "http://www.generasia.com/w/index.php?title=Aida_Shigekazu&oldid=557140"
Categories: