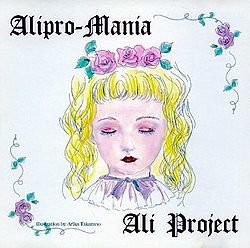 Alipro Mania is the first mini-album released by ALI PROJECT. The album was released under ALI PROJECT' own label ZAZOU Records and only sold through their official website. A new version of the only vocal track of the mini-album, "Coppelia no Hitsugi", was released two years later as their 10th single.