"Katana to Saya" is the 29th single released by ALI PROJECT. It was released in two versions, a regular CD only edition and a limited CD+DVD edition. It was their second single to be released in two editions and to include a DVD. The title track was used as opening theme song for the anime Katanagatari. The music video was filmed in EDO WONDERLAND and it's theme are the Hyakki Yagyou and the Oiran. 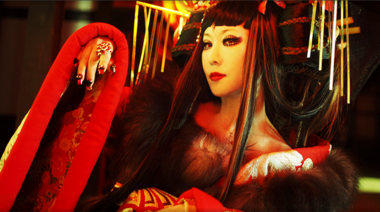