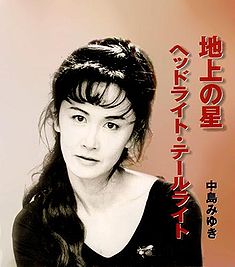 "Chijou no Hoshi / Headlight, Taillight" is the 37th single released by Nakajima Miyuki. "Chijou no Hoshi" was used as the theme song for the NHK program Project X ~Chousensha-tachi~. The single reached #1 on the Oricon weekly charts in 2003 after her performance at the 2002 NHK Kouhaku Uta Gassen and charted for 202 weeks, selling 1,115,989 copies.