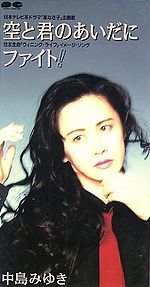 "Sora to Kimi no Aida ni / Fight!" is the thirty-first single released by Nakajima Miyuki. The song "Sora to Kimi no Aida ni" was used as the theme song for the drama Ienaki Ko. While "Fight!" is from her tenth album Yokan that was released in 1983. The single reached #1 on the weekly Oricon weekly charts and charted for 35 weeks, selling 1,466,130 copies. Because it sold 1,415,950 copies in 1994, it became the #5 single of the year. This is her best selling single to date.