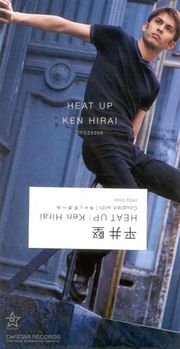 "HEAT UP" is the sixth single released by Hirai Ken. The title track was used as the series Koshien e no Michi theme song, it was also used as the '97 High School Baseball games image song. This was his last single to be released in a 8cm disc. It was reissued after Hirai was transferred to DefSTAR Records.

The single didn't chart on the Oricon charts.