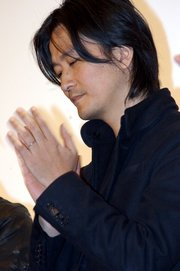 Kiriya Kazuaki at the CASSHERN premiere

Kiriya Kazuaki (紀里谷和明) or 'Kaz I. Kiriya', is a photographer and a director of movies. He is best known for writing and directing the Japanese science fiction film CASSHERN (キャシャーン) (2004); which was based half on the 70's anime Shinzou Ningen Casshan (新造人間キャシャーン) and William Shakespeare's Hamlet. He is listed as being the Producer, Supervisor, Script Writer, Photographer and Editor for CASSHERN at JMDB.

Kiriya was born on April 20, 1968 in Kumamoto Prefecture, and graduated from Asagiri in Kumamoto Prefecture. He married Utada Hikaru on September 7, 2002. This caused a lot of controversy in the Japanese music business, as she was only 19 years old at the time, and that Kiriya is 15 years older than her. He has directed many of Utada Hikaru's PV's, most notably a string of three entitled the Kiriya Trilogy, which all have an interwinding storyline. Kiriya is known for his unique style, which brings together breathtaking aesthetics and deep, complex storylines. Many of his works have a science fiction theme to them.

He also directed an ad titled "Tekki" for Microsoft's Xbox and a short film titled "Treasure" for Nissan.