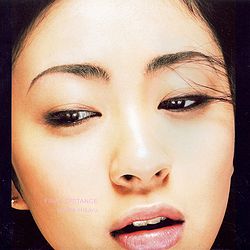 "FINAL DISTANCE" is Utada Hikaru's eighth single. "DISTANCE" was originally scheduled to be released as a single, however it was held back after a shooting occured at an Osaka high school. One of the deceased, Yamashita Rena, had previously won an essay competition writing about Utada being her role model in life, and so Utada re-arranged the song into a ballad to commemorate her, and titled it "FINAL DISTANCE". It was also the "DoCoMo M-stage" CM song. The single reached #2 on the weekly Oricon charts (under Morning Musume's "The Peace!") and charted for 13 weeks. The single became the #24 single of 2001 in Japan. This single, as well as "Hikari" and "SAKURA Drops / Letters", strangely did not chart in the world charts airplay charts or sales charts. In total the single sold over 580,000 units.

There are four versions of "FINAL DISTANCE" to be found in Utada's discography. These different versions are: